Angkor Wat temple is the reason why millions of tourists descend on Siem Reap each year. This UNESCO World Heritage site was built in the early 12th century and is still the world’s largest religious monument ever built. Although originally built as a Hindu temple and unusually dedicated to Vishnu, it gradually transformed into a Buddhist site. It was used as the state temple for King Suryavarman II and became his final resting place. The temple was designed to represent the mythical home of the Hindu Gods – Mount Meru. Angkor Wat has become the national symbol of Cambodia. It is featured on the national flag, many businesses feature the name “Angkor” and there is even a beer named in its honour. 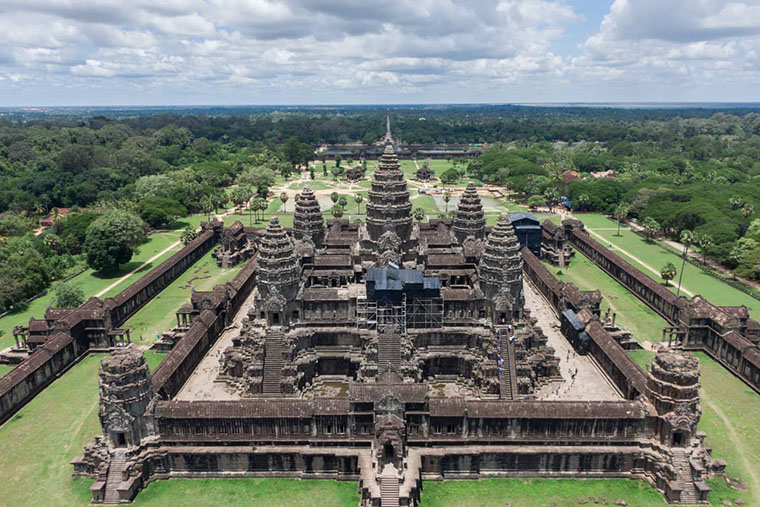 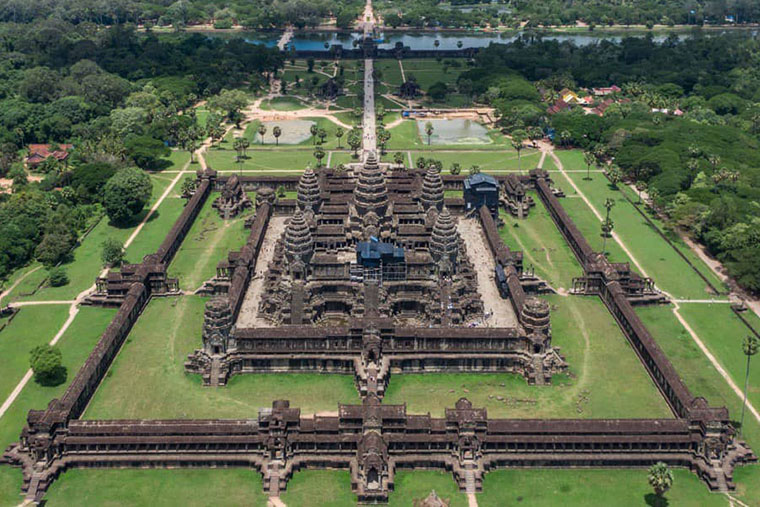 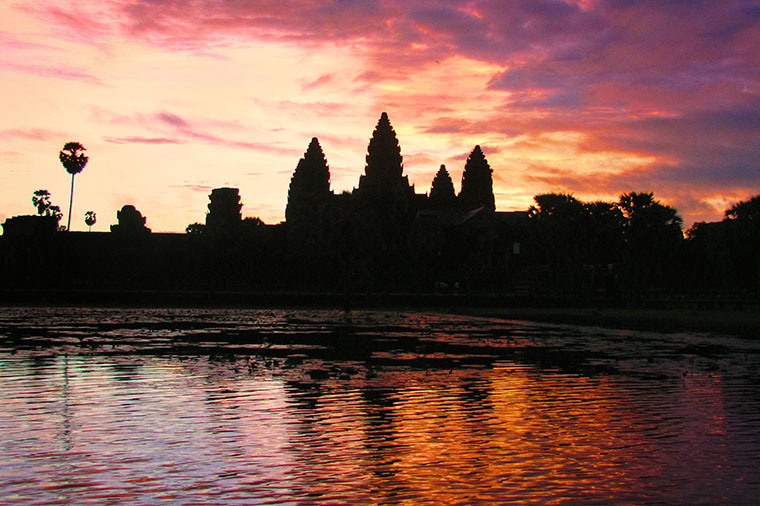 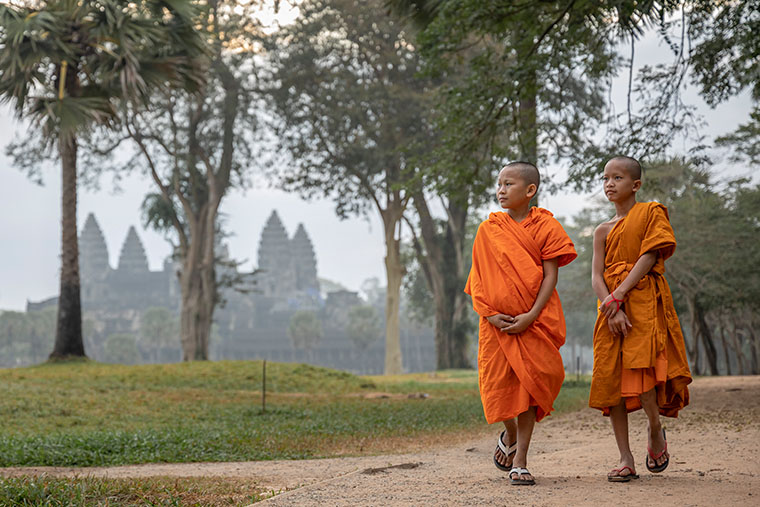 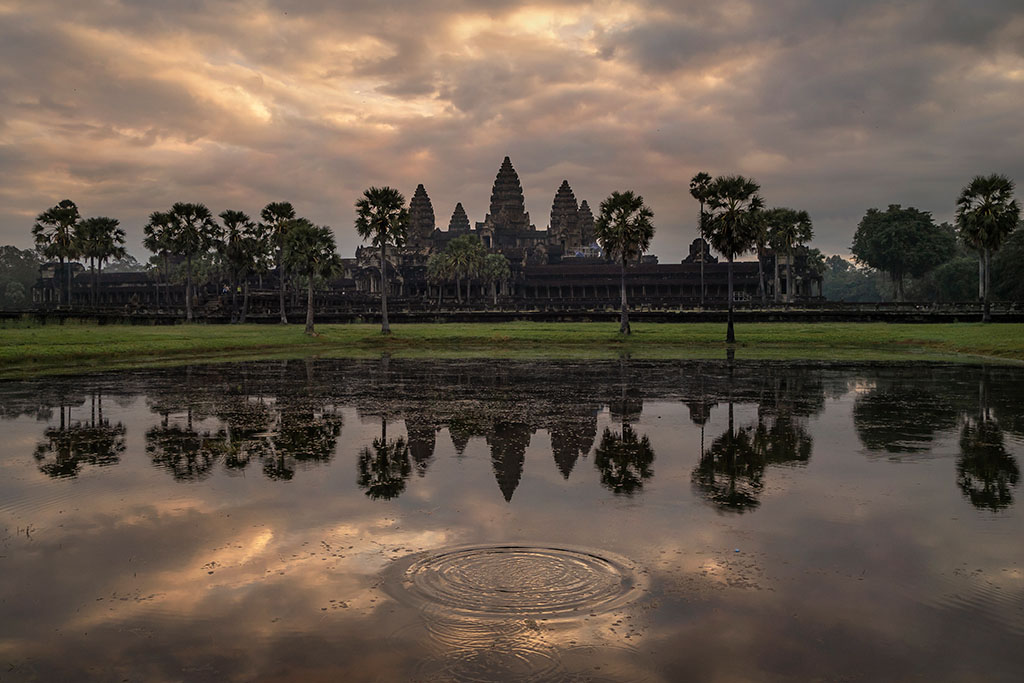 Length of Visit: 2 Hours – Half Day

Length of Visit: 2 Hours – Half Day

Angkor Wat is located about 7km from Siem Reap town. There are two main roads you can take from town. You can head north-east on Sivatha Boulevard and keep going directly to Angkor Wat. Alternatively, you can head north-east on Charles de Gaulle. However, if you don’t already have your ticket, you will need to head towards the Angkor Ticket Office. The ticket office is located on the corner of Street 60 and the Apsara Road. You can the continue your journey northeast on Apsara Road and then drive around the moat to the entrance of Angkor Wat. Alternatively, you can head back to Charles de Gaulle and head north-east directly to Angkor. Whatever way you go to Angkor Wat, you will need to pass through a checkpoint where your tickets will be inspected. You will need your ticket again when entering the temple.

There are many transport options for Angkor Wat. As it is only a short distance from the town, it is possible to cycle or even walk the short distance. The road is flat the whole way and even amateur cyclists should find the ride quite easy. Beware that it can get hot in Siem Reap, especially in the afternoons. Tuk tuks are a popular way to get to the temples. Taxi, minivans, and minibuses are also available. There are also more unique options including electric cars, electric bicycles, and even transport apps such as Grab or Passapp.

Angkor Wat is the reason why nearly everyone comes to Siem Reap. It’s the world’s largest religious monument, it’s absolutely breathtaking, and it’s the why you’re reading this guide! There’s no reason why you shouldn’t visit Angkor Wat if you come to Siem Reap.

By the end of the 12th century, Angkor Wat had turned into a Buddhist temple.

In the 16th century, the temple was neglected. Although it wasn’t totally abandoned like some of the temples, the moat helped to preserve the temple from the encroaching jungle.

Antonio de Madalena, a Portuguese traveller, was one of the first western travellers to visit the area. He wrote that the building was like nothing else in the world and words could not do it justice.

In the 17th century, there is evidence that Buddhist Japanese settlers had started to live in the area. There are inscriptions which describe the Japanese pilgrims celebrating the Khmer new year with the locals in 1632.

Unusually, Angkor Wat is orientated to the west. Most Khmer temples were built facing the east. This has led many to believe that Suryavarman intended the temple to be his final resting place. Other historians believe that the west facing temple is due to the fact that it was dedicated to Vishnu instead of Shiva.

The style of the temple is considered to be the classical style of Khmer architecture also known as the Angkor Wat style. The temple was built from sandstone and laterite.

Features include the outer enclosure surrounded by a 190m wide moat. Access to the inner part of the temple is via a sandstone causeway to the west, which is thought to be a later addition.

Entrance buildings (or Gopuras) sit on each of the cardinal points (north, east, south, and west).

In the central structure, there are three main galleries. Each one is higher than the last. Again, each gallery features a gopura at each of the cardinal points. The two inner galleries have towers in the corners with a central tower.

There are also two libraries which feature devatas on the wall. It was thought that these libraries were flooded to represent the ocean in Mount Meru.

The east gallery features scenes from the Churning of the Sea of Milk. This carving shows 88 devas and 92 asuras churning the sea. A later addition then shows Vishnu defeating the asuras.

Thoughtful thoughts to your inbox